In this fun tournament, you can explore some obscure variants of Go – and you might even win a game against a dan player without handicap, since these games can be very tricky and surprising…

What is Crazy Go?

Crazy Go means all variants of Go that are not standard, sometimes tricky and sometimes bizarre. Usually, only a few modifications to the rules are made – with surprising results.

What did we play?

We played mini-tournaments in four variants of Go and here are the winners (rules and detailed results below): 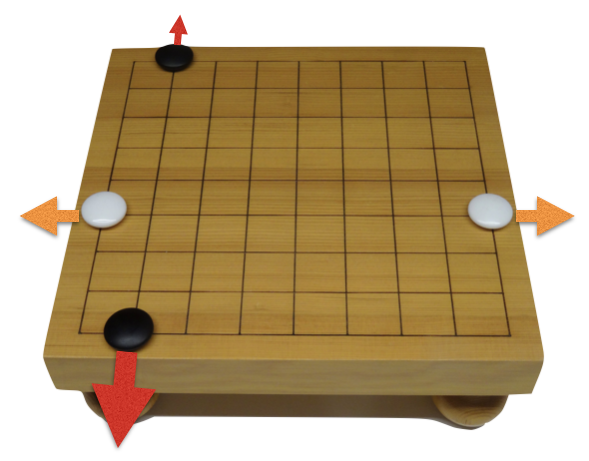 In this variant, only the board is different: every boundary point of the Go board is considered to be connected to the boundary point on the other side of the board, so that each point has four neighboring points! This leads to some surprisingly tricky gameplay! 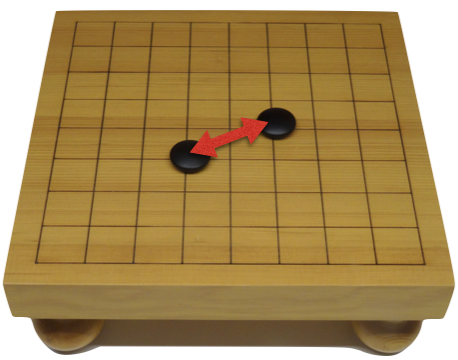 Each player plays two stones simultaneously. Both stones must have a keima distance (see picture). It is absolutely not allowed to put single stones on the board. One alwyas must put two stones in keima distance simultaneously! At the end of the game, prisoners are only the stones that have been captured. Everything on the board is assumed to be alive. Territory are only points that are from all sides surrounded by stones of one color (or the boundary of the board). If there is an enemy stone in “your” territory, it isn’t your territory and doesn’t count for your points!

Note: suicide is forbidden! If the first stone cannot be played due to suicide, then the second cannot be played either, even if playing both at the same time would be okay (because they would capture enemy stones). 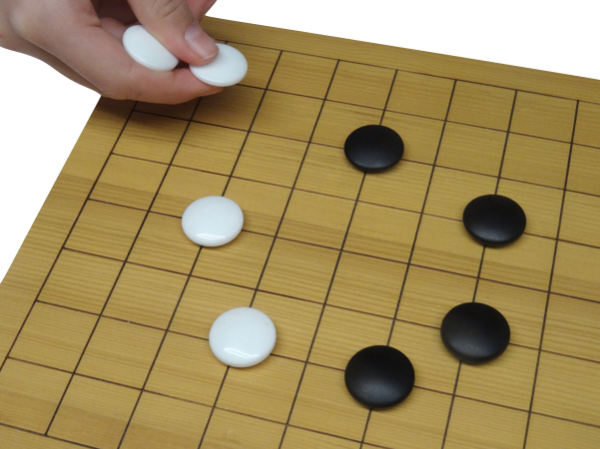 The rules are simple: black plays one stone, white two, then black three, white four etc. All stones are played sequentially, so each move has to be legal by itself. Don’t be surprised if your group with two eyes suddenly dies, though… 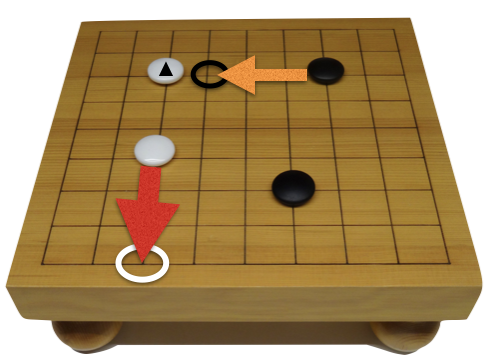 The players take turns playing stones as usual. After a stone is placed, the (up to four) closest stones on the same line (horizontally or vertically) move:

After the movement, stones without liberties are removed from the board.

In the picture, the marked white stone has just been played. Thus, the black stone is attracted (orange arrow), the white stone is repelled (red arrow). The other stone is not moved, since it is not on the same line with the new stone.

This is a rather disturbing variant of Go, since we are so much not used to stones changing their places…

In each category, there will be a separate tournament. As crazy Go is – well – crazy, we will not need any handicap stones! (Usual Go ranks are mostly useless here…) We will also not have komi. Colors will be determined by nigiri. We play on 9×9 boards. The thinking time and the precise modus of this tournament will be decided depending on the number of participants. It will most likely be a knock-out tournament or Swiss system (= MacMahon where everybody has the same starting score). There will be prizes for the winners in each category.

For the overall champion in Crazy Go, points are given to the best five players in each tournament (5 points to the winner, 4 to the second place etc.). The sum of these points decides on the placement in the Crazy Go competition. As a tiebreaker, the average placement in the tournaments is used. As a second tiebreaker, the points are weighted by the number of participants in each category. As third tiebreaker, a game in a randomly chosen variant of the four Go variants listed above will be played.

But most importantly: Crazy Go is less about winning, but about having fun! The nice thing is that everybody has a chance to play exciting games with everybody. We have seen dan players losing against double digit kyus… Feel the sudden surprise that groups that seemed to be very well alive suddenly get captured and dead stones develop a surprising live!