EGC Oberhof is well on its way with numerous side events going on at the same time. The biggest one thus far easily was the Relay Go Tournament, organised by our guests from China, the International Team-Relay-Go Committee. This tournament was special not only in its rules, but also in its conduct. You could hear very excited shouting and busy people running around during Relay Go. Perhaps surprisingly to some, the European Team took the win!

Teams are playing in a Rengo Style with two players on each side of the board. However, there’s a twist! The game is relayed simultaneously on two separate boards a few meters away. On these additional boards, others members of the two teams each discuss the game with their respective coaches.

The coaches of each team may bring on a substitute player during the game and even call for time-outs to discuss tactics. These special actions are limited of course, but they make for a very interesting and novel take on the game of Go. Thank you to the Chinese pros for introducing us to Relay Go! 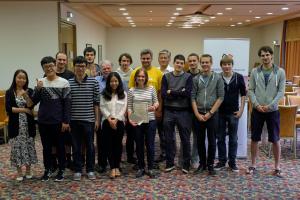